At the AGM in 2017, it was decided that scorecards would no longer be provided by the league. Clubs therefore need to download and print scorecards for their own home matches. If you have any scorecards left over from previous seasons, these are equally acceptable but please make sure you send them to the new email address. Do not put them in the post.

Welcome to the new Scorecard for the 12-point scoring system.

It's the same deal as the old scorecard - mainly because the playing format is the same:

The nine, 12-game rubbers are represented by the numbered boxes in the middle of the card. The numbers are the ORDER OF PLAY*.

The name boxes state 'FULL NAMES PLEASE', which just means that you need to put a FIRST & SURNAME.

You DON'T need to write your middle name, and you don't need to write 'Michael' or 'Timothy' if everyone knows you as 'Mike' or 'Tim'. OK?

Just NO Initials, Nicknames, First name only, or Surname only.

I need to be able to differentiate between 'James Walker' playing for Wigginton this week, and 'John Walker' who played for Selby last week (for example). I can't do that, if one or both Captains writes 'J.Walker' instead of the full name.

BOTH Captains need to sign the card at the bottom, after first checking that all the results are correct.

Where the old 'Winners' line used to be (immediately above the signatures), is a new line to record the POINTS result of the match. The points in these two boxes, should always add to 12.

Below is a card from the first completed Match of 2012, and shows all you have to do.

At the end of the match, the game scores for each of the home pairs, are totalled, just the same as last year.**

Wigginton won 7 of the 9 rubbers, one was drawn (rubber # 1), and one rubber was won by Castlegarth (by Roger Fawcuss and David Corbyn - rubber # 7).

However, Wigginton also won the most games, and so they win the 'Team Bonus' and get 3 points.

So, the overall Match Points Score is:

Just write that in (as below) and then BOTH Captains sign the card, and that's it, done.

**The rubber scores for each of the home pairs have been added up, and written in the two far right columns, with the HOME team's games totals first.

These are then all added for the overall Match games score. In this case, it's 68-40, with the HOME team's total written first. 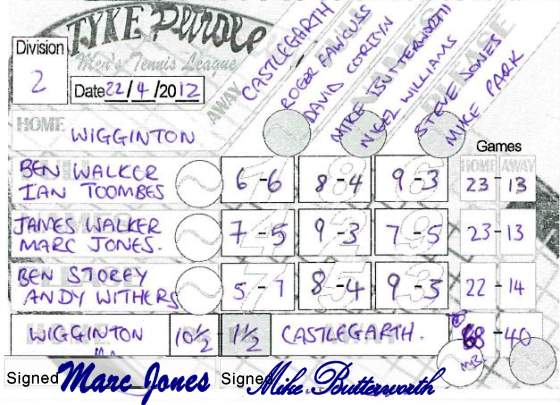 So ...what's with the Tennis balls?

The Tennis balls are there if you wish to record the point scores of each pair. The idea behind changing the scoring system, was to place more emphasis on each pair's efforts rather than just lumping everything into a team pot.

So, Captains can jot down the contribution from each pair in the Tennis balls on the card (as below). Each pair can score either 0,½,1,1½,2,2½ or 3 points, so each ball should contain one of those numbers.

The sum of the numbers in all 6 'pairs' Tennis balls (home & away) should add to 9 - because there's 1 point for each of the 9 rubbers.

The two Tennis balls in the bottom righthand corner of the card, can be used to note how the 'Team Bonus' is apportioned. The Team Bonus is 3 points for scoring the most games overall, with the points shared in case of a 54-54 draw.

So, each of the Tennis balls in the bottom right can contain 0,1½ or 3. Both together should add up to 3. 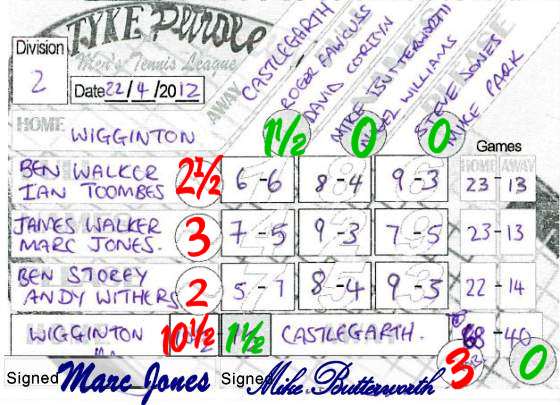 Adding the points totals in the Tennis balls for each pair, could only be done at the end of the match. Some Captains have said they'd really like to keep a tally of the rubber points as the match progresses.

That's easily accomplished. After each of the three rounds, just place a tick in the Tennis ball next to each pair who've won a rubber. 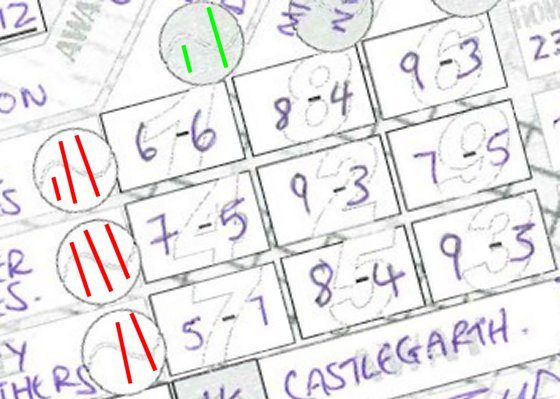 Where a rubber is drawn, 6-6, then just put a 'half-tick' in the lower half of the ball, below the ball join line.

To differentiate, make sure that full ticks cross the join line, starting in the top half and ending in the bottom...

At the end of the match, you can tally up the ticks, adding them to the apportioned 'Team Bonus', put the total in the white or grey 'Pts' box on the RESULT line, declare the match result, and sign the card.

Whatever floats your boat ...just as long as the match result adds up to 12!